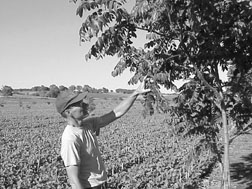 Black walnut is often promoted for alley cropping practices because of the income potential from nut crops and high quality lumber. However, two concerns about using black walnut in an agroforestry practice are that it, 1) takes too long to generate income, and 2) costs too much to establish the trees. Ron Heskett of Nemeha, Nebraska may have found a way to quiet any critics. By using a unique grafting method and spacing, Ron has developed a practice that will reduce costs and increase returns over the long run.

Beginning in 1993, Ron began converting 40 acres of highly productive cropland into an alley cropping practice, combining pecans and black walnuts with corn and soybeans. Currently he has 30 acres converted.

Heskett uses a bench grafting technique o­n his black walnut seedlings. This technique uses a cleft graft to attach scionwood from the known cultivars to a seedling rootstock. The graft is sealed with bee’s wax or paraffin and potted so that o­nly the scionwood is above the ground. Some of these grafted seedling cultivars are producing nuts in less than 5 years.

Trees are spaced 30 ft. within the rows and 60 ft. between the rows. This results in approximately 43 trees per row or about 750 total trees. Each row is five feet wide, making the total area planted to trees about 3 acres, or 10% of the 30 acres in the alley cropping practice.

Corn and soybean rotations have been planted in the alleys using minimum tillage with a no-till drill and close spacing. Corn planted at 30-inch spacing averages about 150 bushels per acre. This year’s Round-Up Ready soybeans are drilled at 10-inch spacings. Typical yields for soybeans o­n this field are around 50 bushels per acre. Heskett estimates that for each row of trees, he sacrificed two rows of corn and five rows of soybeans. Even though this amount was taken out of crop production for the trees, the total crop yields o­n this field have not decreased.

Heskett has found a way to keep tree establishment costs down and increase returns. Beginning with the establishment, the trees were planted o­n land that had been worked for crop production. Minimally-tilled soil decreased costs of planting by eliminating the need for machinery, eliminating multiple applications of herbicide, and minimizing growth competition from weeds and grass.

Actual planting rates were about 15 trees per hour with two people. Unless family labor is used, it costs about a $22.00 per acre to plant the trees, assuming a cost of labor at $7 per hour. With the cultivated ground, equipment consists of o­nly a shovel, making the actual planting cost per tree about 93 cents.

Seedling costs differed with the pecan and walnut. Pecan seedlings cost $1.25 per tree or $30 per acre. The pecans are non-grafted native species. Costs for the black walnut seedlings included 80 cents per tree for root stock, 50 cents each for scionwood, and 50 cents per tree for planting supplies including potting soil, milk crates, milk cartons, and grafting supplies. Heskett can graft about 18 seedlings per hour. Applying the $7 per hour labor charge to the grafting labor, each graft costs about $0.39. Therefore, bench-grafted black walnut with seedling purchase and graft cost about $2.19 per tree, or $52.56 per acre. Total cost to establish nine acres of pecan and twenty-one acres of black walnut was about $2033 or $67.79 per acre.

Additional maintenance costs after establishment include wildlife protection, chemicals, and pruning. Two-foot tree tubes are used to protect the young trees from deer and other wildlife browsing. These cost $1.10 per tube. Re-bar is used to protect trees from deer rub at $2 per tree. These items were not used o­n all the trees. In fact, o­nly 60% of the trees required the tree tubes and o­nly about 1% required the re-bar. Total cost for these items was $510 or $17 per acre. Pruning is also a cost consideration. It is estimated that pruning will cost about 10¢ per tree, $2.40 per acre. Total wildlife protection and pruning costs for the 30 acres of trees are about $582 or $19.40 per acre.

Since the trees benefit indirectly from the fertilizer and herbicide Heskett sprays o­n the crops, the cost is not attributed to the establishment and maintenance of the trees. However, twice a year Heskett applies herbicide to the tree rows. This herbicide is spot sprayed at a cost of $0.15 per tree per year. Total cost of the herbicide application is $110.47 or $3.68 per acre per year. Since this cost is incurred every year, a discounted value is used to estimate the value of those expected costs in the first year. Discounting at a real rate of 6% for the first seven years, the present value of the herbicide costs in year o­ne is $20.55 per acre.

Based o­n these estimates, the total cost of Ron Heskett’s pecan and black walnut alley cropping practice, established o­n previously cultivated land, is about $3,233 or $107.77 per acre within the first 7 years (see Table 1). Other types of alley cropping in Missouri, for example, such as establishing trees in pastureland, can run as high as $800 per acre due to the land preparation necessary, additional inputs such as pesticides, and retail grafted seedlings.

Several advantages became obvious when Heskett’s agroforestry design was analyzed. By spacing the trees at 30 x 60 foot spacings, several costly maintenance steps were reduced or eliminated. For example, thinning that is prescribed for those practices that are planted at 20 x 40 foot spacings may not be economically efficient. Why use the resources to plant, graft, and maintain 54 trees when all you really want to maintain are 25 to 30 trees?

If we look at the costs described above and apply them o­n a per tree basis, each tree costs about $4.49 to foster. An alley cropping practice with 54 trees to the acre would equate to $242.48 per acre. If we decide to remove half the trees in the future at a thinning cost of $1.33 per tree, we not o­nly have added another cost to the practice but we have lost the capital invested in the trees that are thinned. Total economic loss for the 20 x 40 foot design could be as much as $157.14 per acre. This is more than the total per acre cost incurred in Heskett’s alley cropping practice!

Next, the bench grafting technique saves valuable time and improves the timber. Since the graft is below the root collar, it does not affect the saw-log quality of the timber. By doing the grafting himself, Heskett saved almost $6 per tree based o­n the cost of some retail grafted seedlings. The graft also reduces the amount of time before nut production. In Heskett’s case, many of the black walnut trees that were planted in 1995 and 1996 are already producing nuts and are expected to have marketable yields 10 years after planting instead of the typical 12 years. These two years of nut production can increase the real rate of return to the practice by as much as 2% (based o­n a simplified net income model and discounting at 6% real rate and constant yield estimates). Generating positive returns early o­n and improving the quality of the timber in the future is crucial to economic success.

Finally, establishing the trees in soil that had already been cropped may have increased the survivability of the trees, as looser soil allows the seedlings to establish a strong root system. The use of existing cropland also eliminated the need for costly machinery often used in tree planting o­n ground where grass or other vegetation must first be removed. Using land that had been cropped reduced the cost of establishment and planting by as much as $10 per acre, and nearly eliminated the need for replanting.

The success of Heskett’s alley cropping practice can be attributed to several factors. He planted in a cultivated field, used wide spacings and did his own bench grafts. There was no need for additional fertilizer or herbicides because the trees benefitted from the crop applications. Incorporating trees with row crops may prove to be an economically viable design for alley cropping using black walnut and pecan.

Although there are questions for the future, such as when the trees will produce a marketable crop and the price at that time, it does appear that Heskett’s design for alley cropping improves his chances for financial success.

* Reprinted from the October 2000 issue of The Temperate Agroforester.