Food Forests in the American Southwest

Food forests, which are also known as forest gardens or home gardens, have typically been associated with tropical regions. They are receiving increasing attention in temperate agroforestry circles, however, and articles about them have been published previously in both the AFTA (Crawford 1998) and USDA National Agroforestry Center newsletters (MacFarland 2014; Bukowski 2016).

In the American Southwest, food forests are both a centuries-old and a new practice. It appears that they were first established in the Southwest following the arrival of the Spanish in the 1500’s, who brought with them many food-producing tree, shrub, vine, and herbaceous species from the Old World (Dunmire 2004). Native Americans in this region managed trees and forests prior to the arrival of the Spanish, and sometimes quite extensively (Doolittle 2000; Anderson 2013), but the practices documented to date do not appear to fit that clearly with the concept of a food forest as a relatively dense planting that includes multiple woody species and vegetation layers. Some of the introduced woody species, such as peaches, were readily adopted by Native Americans, however (Figure 1). Spanish missionaries and settlers practiced a type of agriculture that has been called “mixta” because it combined fruit trees, vegetables, and legumes, along with livestock, fowl, and bees (Arellano 2014). Although it appears to be in decline, this type of agriculture can still be found around some Hispano homes and farms in the region and some small orchards remain - or have been more recently established - on reservations in the region (Ortiz et al. 2007; Salmon 2012).

Figure 1. Photo taken within the Havasupai Reservation of what is probably a peach orchard. The photo is entitled “Orchard and Cliffs, Havasu Canyon, Grand Canyon 1910-1924.” Photo is used with the permission of the Cline Library Special Collections at Northern Arizona University.

Several modern-day food forests or associated projects in the region play a valuable educational role. Although it is on the very fringes of what might be considered the American Southwest, one of the most notable forests of this type was established by Jerome Osentowski, Founder and Director of the Central Rocky Mountain Permaculture Institute (CRMPI) near Basalt, Colorado (Figure 2). Over a thousand people have visited Jerome’s food forest since its establishment in the 1980’s and many have completed short courses offered by CRMPI. 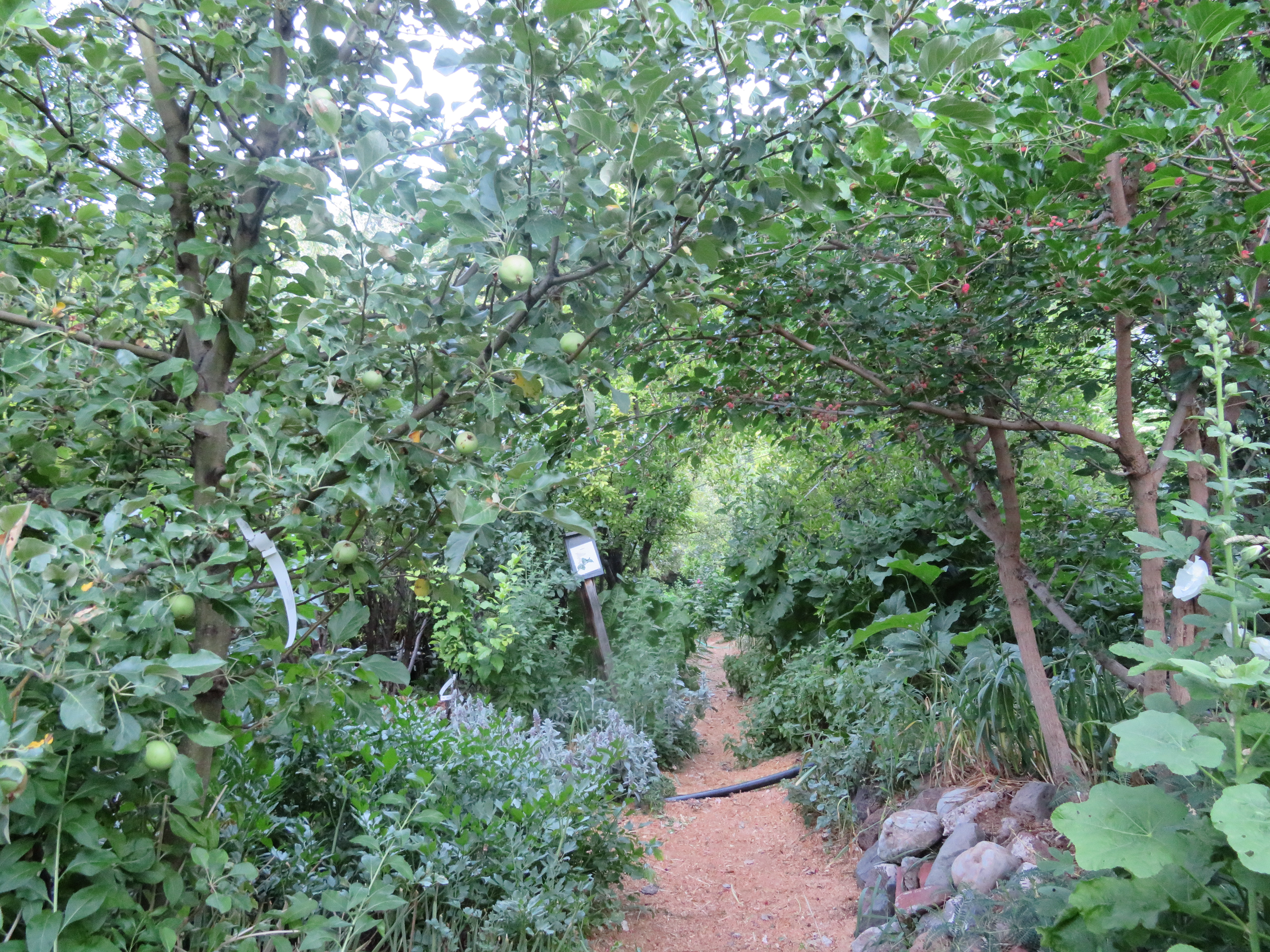 Another organization that is doing very promising work is the Hopi Tutskwa Permaculture Institute (HTPI), which is located in the village of Kykotsmovi, on the Hopi Reservation in northern Arizona. HTPI’s vision is “to strengthen community through the continued intergenerational practices of traditional Hopi farming and gardening, rainwater harvesting and spring restoration, natural building, and orchard-keeping while applying applicable Permaculture principles, methods, and techniques” (https://www.hopitutskwa.org/about). At their Living and Learning Demonstration Site, the HTPI is putting this vision into practice with the development of a food forest incorporating overstory tree species, fruit trees, shrubs, medicinal plants, and other species (Figure 3). In this dry environment, water is provided to the plants using a combination of swales and drip irrigation, the latter from a network of rainwater collection tanks with an approximately 14,000-gallon storage capacity. The HTPI also conducts permaculture-themed workshops, restores old orchards, and sells plants through the local farmers market. 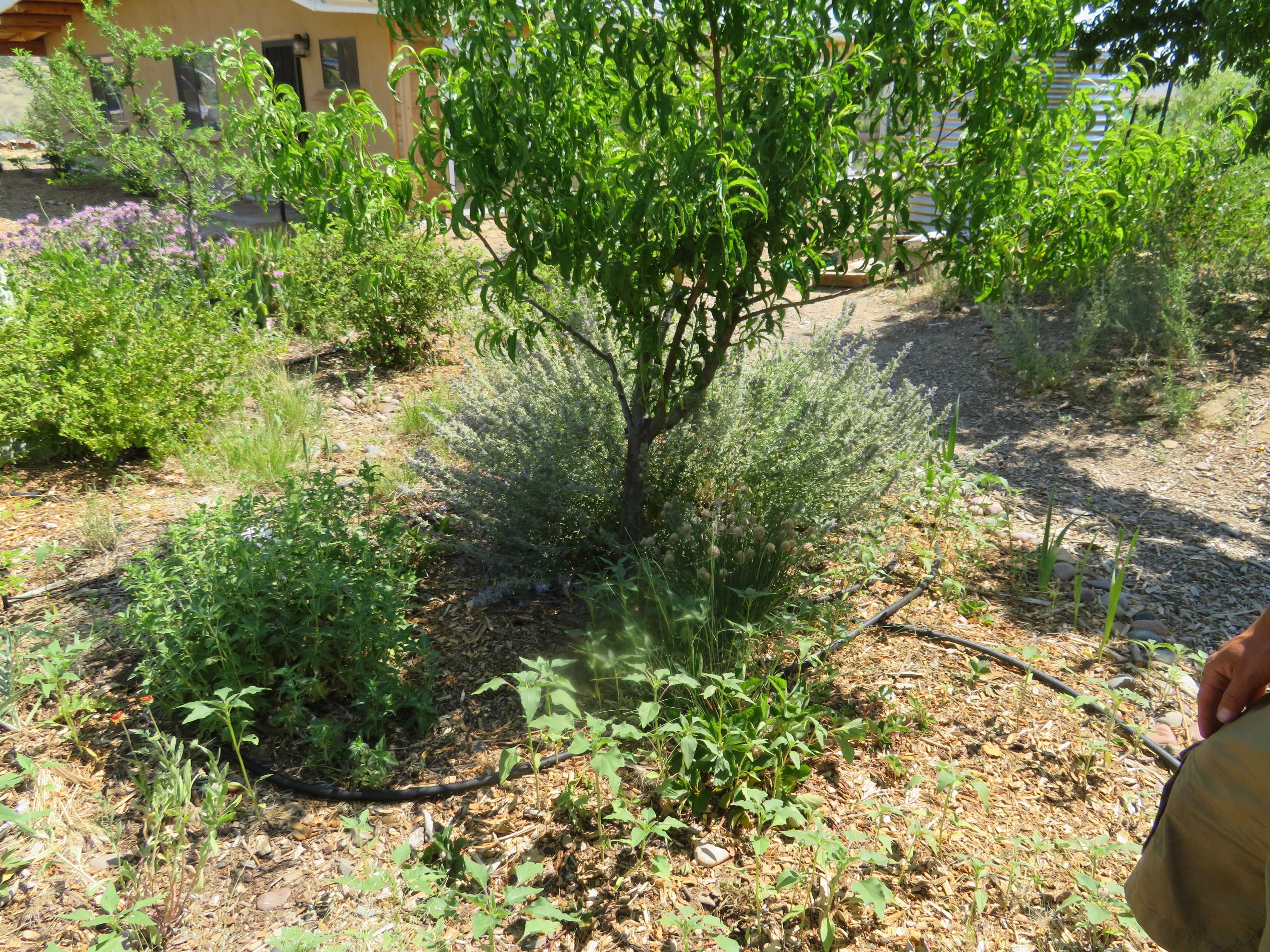 Figure 3. The developing food forest at the Hopi Tutskwa Permaculture Institute in Kykotsmovi, Arizona. Note the drip irrigation lines and the large metal rainwater collection tank in the background.

Some food forests in this region are making use of both temperate and tropical species, such as a 1/3-acre food forest in the Phoenix area that is the subject of many YouTube videos. This forest features species such as Moringa, guava, and date palm along with species found in more temperate settings such as mulberries. Although he no longer lives there, you can still readily learn about this particular food forest, as well as some others in the region, by watching the videos produced by Jake Mace (aka “Vegan Athlete”).

An innovative project that promotes southwestern food forests is the Linking Edible Arizona Forests (LEAF) project. Their website states that the “LEAF Network is a community-based organization with the mission to link people with the benefits of edible trees and support edible trees with people’s stewardship” (https://leafnetworkaz.org/). In addition to developing a very information-rich website, the LEAF network has conducted outreach activities such as workshops, field trips (Figure 4), and presentations to county Master Gardener groups. LEAF was funded by a grant from the Arizona Department of Forestry and Fire Management; that funding has been expended, but some of the LEAF organizers plan to keep this network going. 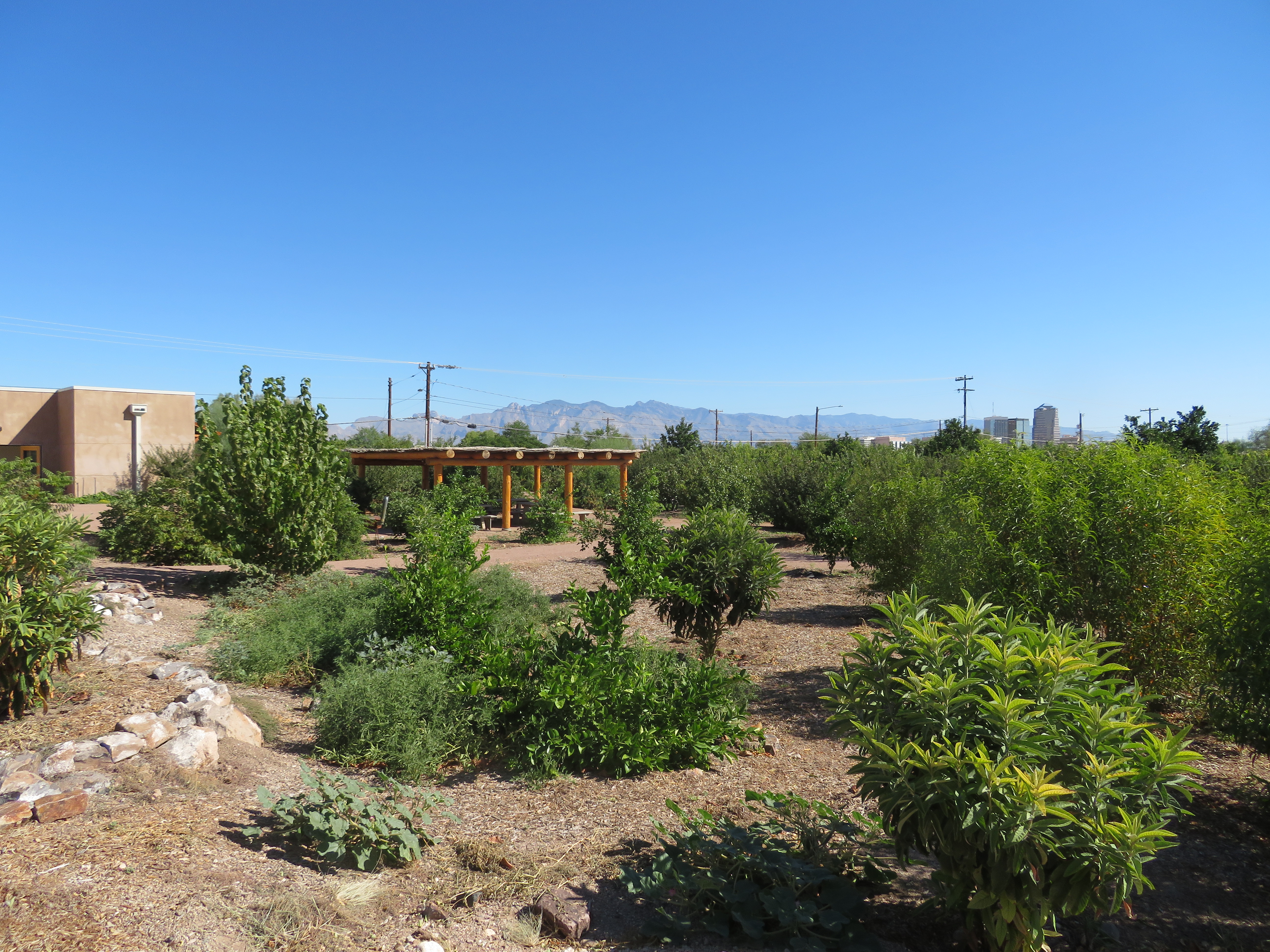 Figure 4. One stop on a LEAF-sponsored field trip in September, 2017 was at the Mission Garden in Tucson, Arizona. Mission Garden is a re-creation of a walled garden that was part of the historic San Agustin Mission and features many of the species that are prominent in today’s southwestern food forests.

There is what some may find to be a surprising (and to me a very encouraging) amount of information on food forests in the Southwest. Try conducting a search with keywords like food forest, Arizona, and New Mexico and you’ll see what I mean!