Little is known about the viability of commercial, forest-grown specialty mushroom production in the western Pacific Northwest (PNW) even though the region’s climate provides mild temperatures, ample precipitation, and abundant forests conducive to mushroom growth. This potential is evident in the long-standing and lucrative tradition of selling wild-foraged mushrooms in the PNW (Yoon 1992). Compared to wild foraging, however, cultivation of specialty mushrooms requires minimal acreage, is ecologically low-impact, provides reliable harvests, and holds added market value as an ecologically-appropriate, forest-grown product.

Nonetheless, forest-grown mushroom operations are negligible in the region. This may be partly due to an absence of research-based technical resources available to potential growers (Leatham 1982). Production systems that were developed by Extension in humid eastern US environments may be applicable to the PNW, but fundamental information on the production viability of local hardwood substrates, substrate moisture management during the region’s dry summers, and the productive potential of the most commonly cultivated forest-grown mushrooms is lacking.  In 2019, Washington State University Extension received funding from the BIOAg program to establish log-grown mushroom trials on three sites in southwest Washington to examine these variables. 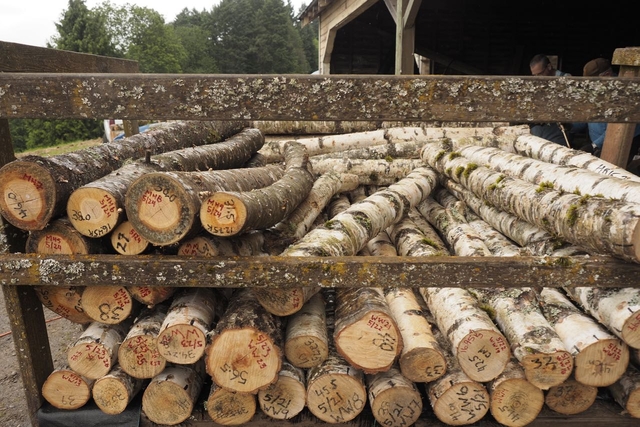 Substrate logs were harvested, sampled for moisture content, inoculated, and placed in stacks at all sites in the spring of 2019.  Two moisture management treatments, passive and active irrigation, were established in stacks immediately after inoculation, along with a control.  Passive irrigation consisted of multiple five-gallon buckets filled with water placed immediately next to the logs (Figure 2) while active irrigation utilized periodic misting from above.  Stacks in these treatments were also covered with a triple layer of breathable, polyester garden fabric to mitigate moisture loss.  Data loggers were then placed on each stack to collect temperature, humidity, solar radiation, and wind speed. 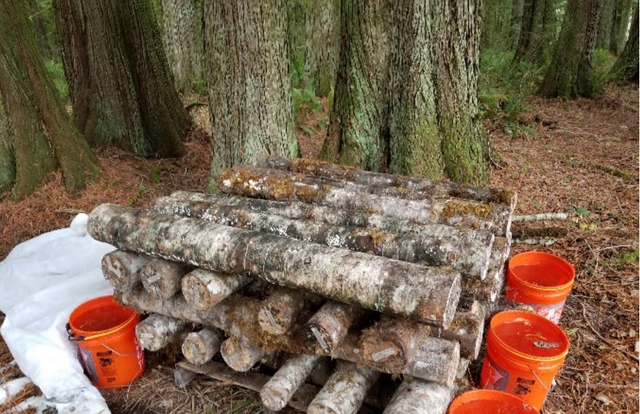 After a one-year spawn run, the first shiitake harvests took place in the spring of 2020 (Figure 3).  All logs inoculated with warm-weather and wide-range shiitake strains were soaked in cold water for 24 hours to initiate the fruiting harvest and the resulting mushrooms were harvested and weighed per log over the following 1-2 weeks.  This process will be replicated three times throughout the summer and fall of 2020, with seven weeks between forced fruiting. 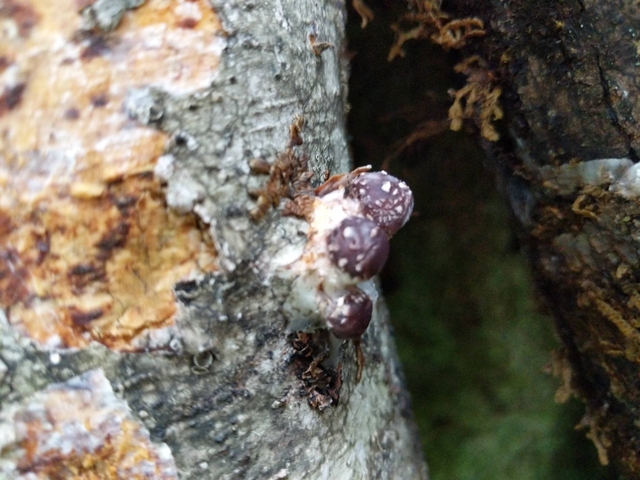 Data from the trials will be analyzed to determine how production correlates with log substrate, mushroom strain, site conditions, and moisture management treatments.  The results will determine the best management practices for specialty mushroom production systems in the unique coastal climate of Washington, as well as its economic viability for small or large-scale production in diversified farms and forest operations in the region.  An Extension guide will be produced to summarize the findings of the project and their implications for potential producers.

Log-grown systems in the eastern US have been proven to be profitable within three years of startup and can have returns as high as ten times the annual investment by the fifth year (Mudge 2013).  Given the demand for wild-foraged mushrooms in the region, these systems have significant potential to provide supplemental income to farm and forestry operations while diversifying production. Western Washington needs assessments suggest that forest owners are interested in non-timber forest products as alternative revenue streams either in place of, or in tandem with timber (Bramwell et al. 2017). Forest-grown mushrooms can also be a complimentary component of diversified farm businesses by uniquely turning forested areas of farms into an added profit source.  Studies that examine the viability of developed systems in the PNW are vital to helping producers avoid losing time and money on trial and error.