Shade for livestock has been cited as one of the top reasons for establishing silvopastures (Orefice et al. 2017). One of the many benefits of shade for cattle production is that access to shade has been shown to limit the amount of time cattle spend congregated around their water troughs (Schütz et al. 2010). Minimizing the time cattle spend congregated around water troughs can reduce soil compaction around the water trough, decrease damage to watering equipment, and mitigate wasting water. While this concept has been demonstrated using artificial shade structures, there is currently limited information about the benefits of natural tree shade for limiting cattle congregation behavior around water resources. As cattle typically prefer natural tree shade to artificial shade structures (Zuo and Miller-Goodman 2004), silvopastures may combine the benefits of shade with various additional ecological benefits such as enhancing wildlife habitat, soil conservation, and water quality.

To evaluate whether access to tree shade would decrease cattle congregation behavior around water troughs, a two-year study was conducted at the University of Arkansas at Monticello in the summers of 2017 and 2018. One control pasture and two shade treatment pastures, each measuring roughly four-acres, were used in this study. The control pasture contained no trees. The first shade pasture contained 30 trees concentrated mostly at the northeast corner of the pasture. The second shade pasture contained 32 trees dispersed throughout the pasture to create several small clusters of shade trees within the pasture. Each year, 15 bred Beefmaster cows (Bos indicus) were used to create three herds of five cows. Each herd was randomly assigned to a pasture at the beginning of each summer. The herds were rotated between the three pastures at 28-day intervals for three months to allow each herd access to each pasture once during the summer.

Cattle congregation behavior around the water troughs was evaluated using GPS-collars. GPS-collars provide a novel way to conduct continuous long-term evaluations of cattle movements and behaviors without the need for direct observations (Anderson et al. 2013). Two cows in each herd were outfitted with Lotek GPS 3300LR radio-collars (Lotek Wireless Inc., Ontario, Canada) set to record a GPS location every 30 minutes for the duration of each summer (Figure 1). The accuracy range of the GPS-collars used in this study was about 20 feet.  The location of the water troughs in each pasture was mapped using handheld GPS units, and a 30-foot radius buffer zone was digitally established around each water trough using ArcGIS® 10.3. Cattle congregation behavior was calculated as the hourly percentage of GPS-collar locations located within the 30-foot buffer zone around the water trough in each study pasture from 7:00am to 7:00pm during each month. 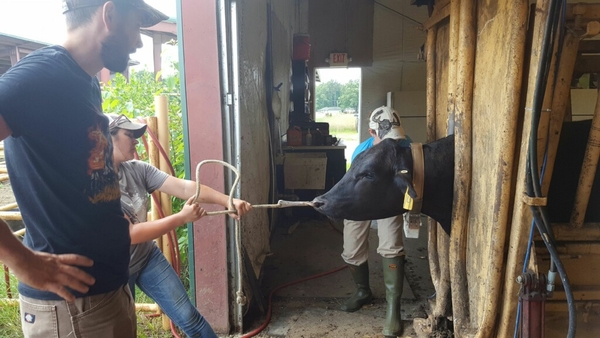 Figure 1. Amanda Foust and field technicians Melissa Butler and Richard Vaerewyck outfitting a cow with a GPS-collar to continuously monitor cattle congregation behavior around water troughs at the beginning of the summer in 2018. 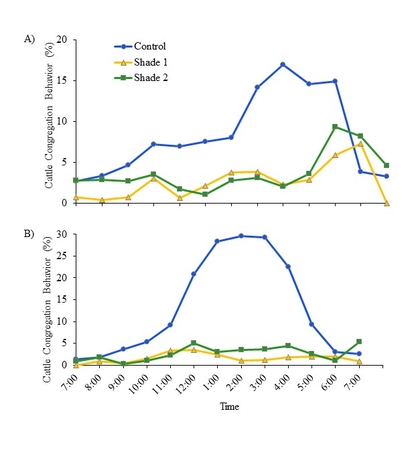 Figure 2. Average hourly percentage of cattle congregated around water troughs in the control pasture with no shade trees and both shade tree pastures (shade 1 and shade 2) during the summer in A) 2017 and B) 2018. 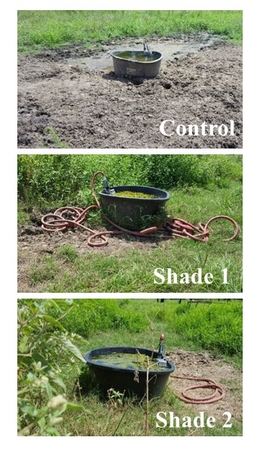 Figure 3. Area around water troughs in the control pasture with no shade trees and both shade tree pastures (shade 1 and shade 2) at the end of the summer in 2017.